Top tips for working in an open plan office.

In favour or out of favour, wallpaper has been around for a while. Though the Chinese were hanging decorated rice paper on their walls for about two thousand years, the history of European wallpaper begins in the 16th century. But it’s not only a history of design and pattern, it’s also a history of domestic taste and technology.

The earliest wallpapers were used in European merchants’ houses to decorate the inside of small rooms and cupboards, but by the 1900s it was the wallcovering of choice for rich and poor.

The first European wall decorations were textiles — in the Middle Ages, wool and silk tapestries were used for both decoration and insulation. The Renaissance saw the rise of the textile with beautifully woven fabrics used as decoration on walls, tables and doorways. But they were expensive, so it was during this time that wallpaper was developed as an inexpensive alternative.

The earliest surviving wallpapers, block-printed and coloured by hand, are from early-16th century England and tended to mimic fabrics.  By the 1600s, wallpaper was far common in western Europe. In fact, in 1599, a paperhangers’ guild was started in Paris and wallpaper was described as a type of tapestry on paper for the poorer classes to cover their walls. At the same time, the Chinese began printing rice paper panels with flowers, birds and landscapes – a familiar design that became known as chinoiseries and were soon imitated by European designers.

It was also in the 1600s that flock wallpaper – the unfortunate butt of many a décor joke -was developed. It involved printing a background colour onto paper, then applying adhesive in a pattern and sprinkling the paper with the dyed trimmings of sheep wool, resulting in a sumptuous textured imitation of cut velvet – not so funny when you think of the effort it must have taken to produce.

By the 18th and 19th centuries, wallpaper was an increasingly popular decoration, with designers exploring different kinds of patterns, including chinoiserie, flocking, scenic papers and imitation swags (curtains). Fascinatingly wallpaper designs were often topical, reflecting historical events. Some American and French wallpapers celebrated the revolutions of 1776 and 1789 respectively, and the Great Exhibition of 1851 inspired several commemorative designs. (It’s worth remembering that around 700 years previously, the Bayeux tapestry had commemorated the conquest of England by William, Duke of Normandy.)

The 19th century brought the Industrial Revolution – an age of rapid technological development in every aspect of life, including wallpaper. Machines that were able to print it developed in the late-18th century and were refined in the 19th century. Steam power was applied to the process, meaning that wallpapers could be printed much more quickly and cheaply than ever before. Interestingly, there were 8 colours printed using industrial methods by 1850 rising to 20 colours by 1874.

Inevitably, the fact that wallpaper was now being manufactured far more cheaply on an industrial scale meant that it became available to a wider population, but as a result design suffered.  A group of Design Reformers of the 1800s turned their backs on previously popular trompe l’oeil, panoramic scenes and imitations of textiles and architecture, considering them to be tasteless and inauthentic. At this point, the likes of William Morris returned to pre-industrial prototypes and methods to create flat, two-dimensional patterns based on abstracted flora and fauna -all part of the Romantic era.

Throughout the 1800s walls were often divided into three sections, the dado, the filler, and the freize – still found in property of the time. The Aesthetic Movement of the late Victorian era, popularised walls with different complementary patterns for each section, with borders between. At this point colour and patterns from the Middle and Far Eastern designs.

From about 1900 to 1935, wallpaper was very popular. The advent of the Modernist movement in the mid-1900s favoured white walls, and advancing technology led to more durable papers, lasting dyes, and easier application and removal of wallpaper. But by the 1960s and 70s, increasing competition from the paint industry caused a decrease in popularity of wallpaper, and that, combined with the oil crisis of 1973, diminished the industry considerably.

More recently, wallpaper is having something of a revival. The popularity of feature walls, the development of digital printing and interest from designers and artists has helped wallpaper return as a bold style choice for the 21st century.

To discuss your requirements please contact us, and if you already have a quotation just give us the opportunity to beat it. 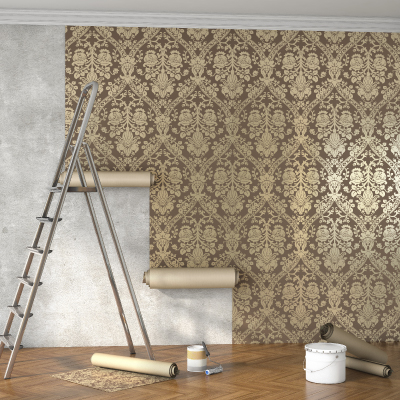