How do you stay focused in an open office?

Some people love the buzz and thrive on the interaction of an open plan office but for some, it can be a nightmare, especially when you’ve really got to focus. Conversations, ringing phones – they can all put you off badly if it’s not how you like to work, so how do you handle the people, the noise and the constant distraction without appearing to be rude and anti-social?

The jury seems to be out on the benefits of an open-plan office. Research has suggested that they are full of camaraderie and creativity exactly because they’re open-plan, though more recent studies suggest that they encourage employees to avoid one another while somehow fostering collaboration. The trouble is, the collaboration can actually be very distracting when you’re working to a deadline or really need to concentrate, but as an employee, you’re at the mercy of the office layout regardless of any personal preference you may have. So, as companies increasingly adopt an open layout, it’s a good idea to learn how to deal with unwanted noise, develop some survival strategies of your own, and see if you can agree to some team ground rules.

Firstly, it’s a good idea to focus on the positives of an open space. We all like privacy and don’t like feeling exposed or checked up on, but getting to know your colleagues, bonding, and developing a feeling of being in it together is very valuable in oiling the wheels of a pleasant environment and minimising potential isolation.

So, when you’re focusing on the positives, try not to moan about the noise and tell yourself that the benefits outweigh the cost. Talk to your manager and see if they will instigate the conversation on how you can all support each other by, for example, coming up with a set of office rules, perhaps that you all quieten down when a colleague is on a call – and no offence taken if someone asks you to be quiet if you hadn’t noticed.

Noise cancelling headphones would be another good idea. You can put them on when you really need to concentrate, your colleagues will know not to disturb you, but you’re still in the room and straight back to being part of the team when you take them off.

Even in an the most open plan office there’s likely to be an empty alcove, cubicle or conference room if you really feel the need to remove yourself from the hubbub – wait until a suitable point and come back when you’re ready. If they can’t see you, they won’t talk to you, but it doesn’t have to be a permanent absence.

The thing you must avoid is becoming so frustrated with a noisy colleague that you end up saying something that you regret and neither of you can forget. Take steps before you get to this point, even if it means asking if you can move desks so that you can be ‘more productive’.

A bit of common sense and mutual respect go an awful long way to getting you the workspace that you want. Don’t suffer until you get to boiling point, but keep things in perspective and be prepared to compromise.

To discuss your requirements please contact us, and if you already have a quotation just give us the opportunity to beat it. 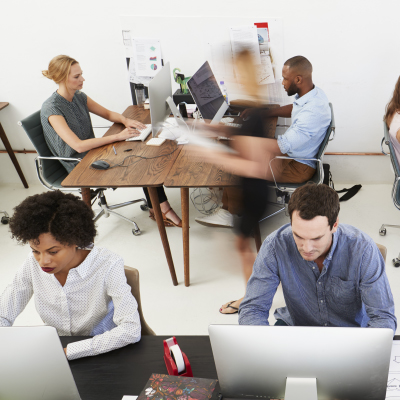